This is another of Nonny’s great reviews. 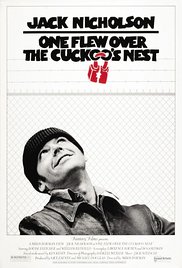 The world we live in is dominated by rules and myths which have become so ubiquitous in society that most of us unquestioningly adhere to them. The few who are independent enough to see the absurdity of our norms and courageous enough to rebel against them are always crushed by the might of the system and turned into outcasts.

One Flew Over the Cuckoo’s Nest is an allegory set inside a mental institution. It is run by the stern and inflexible Nurse Ratched, who upholds the established order and maintains structure and routine. Under her, the asylum remains an oppressive environment where patients are forced to speak in group therapy sessions and given medication at fixed intervals.

Into this scenario comes McMurphy, a prison convict who has pleaded insanity so that he can be transferred to a mental institution. He attempts time and again to rally up support against Nurse Ratched among the patients, only to end up frustrated and thwarted each time. All the other inmates have either been tamed into submission by Ratched or are simply too dull-witted to comprehend McMurphy’s rebellion. In the beginning, however, McMurphy refuses to surrender himself to the system and all of Nurse Ratched’s attempts to subdue him only seems to make him more stubbornly defiant.

But, eventually, the system proves to be too big for an individual to fight and attempt to change, and after an encounter with Ratched where he tries to strangle her, he is given a shock treatment which paralyses him. Bedridden and comatose, he no longer can pose any threat to the establishment.

Ratched is the personification of the oppressive authority figures who control us, and McMurphy is a vanquished rebel. His defeat shows that however arbitrary, however wrong, however unfair the powerful are, they always win. Individuals who are sensible enough to see the absurdity of all the rules we have to follow and all the myths we believe in are presented with little choice. Either they have to fit in and take part in the absurdity, or they are crushed under the might of the entire system. No matter how capable or determined one is, you cannot fight the world. It is too big, and you are too small.

Does that mean no revolution can ever succeed? Maybe a failed attempt can give people hope and inspire them to follow in the same footsteps. McMurphy’s rebellion set an example for others to follow. In the last scene of the movie, we see the Chief, another inmate of the asylum, shattering a window and breaking free. His escape symbolises a small victory against the all-powerful authorities.

This movie compels us to ask ourselves whether we really are any more sane than the inmates in the asylum. After all, we readily believe in all the stories that are fed to us, however ridiculous or impossible. We never question the rules that we live by, and we can’t distinguish the myths that surround us from reality. Maybe the ones who don’t conform to the norm, the ones who don’t meet the expectations of society, the ones whom we label ‘insane’, are in reality saner than us.