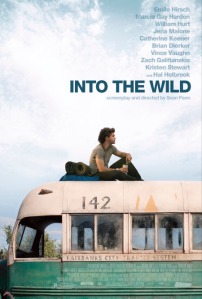 The road had always led west for him. “Thou shalt not return because the West is the best”. It was promising for a man who hated the society shaped by hypocrites, politicians, pricks. So “no longer to be poisoned by the society he fled” to experience, what he called, “Ultimate Freedom”.

Christopher McCandless was a book-reading loner in his own quiet world. His outlook of life was very different or maybe even far too elusive for some. There are scenes in the movie which depicts it well with numerous impactful lines.

We are too emotional and sometimes even possessive when it comes to somebody very close to us, somebody we love. Chris said to Ron, one among the handful of people he met in his journey, “You are wrong if you think that joy of life comes principally from human relationships.”

This sort of a man couldn’t stay and won’t stay here. In addition there was another story in Chris’s life. His father married his mother even after having a first wife. Life had not been peaceful for his parents which had a huge impact on Chris. He felt that his parents had cheated him out of the joy of childhood.

So Chris set out on his long nurtured adventure that would give meaning to ‘his definition of life’. He renamed himself as Alexander Supertramp.

Seldom was he halted by the irksome obligations which he intended to escape. One occasion was when he needed an approval to paddle down the river and it could possibly take 12 years to get one.

But he got there. He got to his dreamland, Alaska. He finally felt like a free man away from the civilization. He discovered his true self in the lap of nature.

Nature is beautiful but at the same time it can be harsh. Alaska was no exception. It showed no mercy on Chris. Very soon Chris found himself in a desperate situation.

Until the very last moment of his life he did not realize that “Happiness is only real when shared.” Chris who had little concern for human relationships felt a strong urge to share and therefore the need for a company.

What would have happened if he had survived? What if the river was not flooded and he could go back to his parents? Were they capable of putting themselves in his shoes? He died with a doubt in his mind. His asked “What if I were smiling and running into your arms, would you see then what I see now?”