After watching a movie there is always a lot of discussions about the plot and the characters. But this time it was different. Those of us who watched the movie ‘House Of Sand And Fog’ sat without uttering a word, empathising with the characters of the movie. Later on some of us wrote a review on this movie. This is one of the reviews on this movie by Sreedutta Samanta of class VIII (2015). 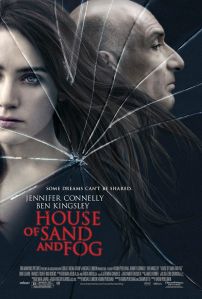 Andre Dubus’s magnum opus “House of sand and fog” is a saga about life’s extreme merciless play being played upon three people- Kathy, Behrani and Lester each with their version to add. For Kathy, life was a reflection of her addictions and overflowing emotions. For Lester, his life was a reflection of his utter readiness to succumb to his temptations. For colonel Behrani, Life was nothing but a reflection of his hurt pride and his utmost trial to protect it from being hurt again which prevents him from giving up or surrendering no matter how difficult the situation is.

In this fabulous tale, Kathy’s house is the bone of contention between the two families. Behrani, a colonel from the Imperial Air Force of Iran, has to migrate to America when a revolution breaks out in Iran and his name is put on the death list. However, he does not surrender and bravely puts up the masquerade of a wealthy colonel while he actually works as a garbage worker to get his daughter married to a renowned Iranian family. Later when the bag of money dwindles to a purse, he buys a disputed property- Kathy’s house at a cheap rate only to sell it after getting a good buyer. On the other hand, Kathy as unfortunate as she is, gets evicted out of her own house on the accusation of owning a business tax. As a result, the lives of two people get irreversibly changed for forever.  Deputy sheriff Lester Burdon falls in love with Kathy on seeing her desperation as well as her beauty. He takes many hasty decisions to prove his true love. He leaves his family and children for the sole reason of his attraction and his affair. After this, he commits many other crimes which dismantle his life, for his lover’s sake. This story has a sad and a violent ending and I am sure it will touch your heart just as it has touched mine.