This movie review is written by Rhea Banerjee (Nonny) of Class VIII (2015). If you have read the Godfather review, you would know that Nonny has developed a great liking towards Michael Corleone, played by Al Pacino, a famous hollywood actor. This movie also features Al Pacino. But regardless of his presence, we can always rely on Nonny to write the best possible review. 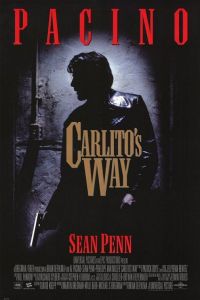 ‘Carlito’s Way’ shows the life of an ex-convict who, just after getting out of prison, is determined not to go back to his old ways in the street. He dreams of living a quiet life in the Bahamas, where he could simply watch the Sun going down and the waves rolling in.

Carlito Brigante, a former big shot in the underworld, gets inevitably involved in the criminal world as the series of events progress. He intends to simply make enough money to be able to go out of the city, but the people he surrounds himself with- his lawyer, Kleinfield, Benny Blanco from the Bronx, Pachanga- drag him back to his old life.

We see Carlito as he is struggling to choose between friendship and his promise to himself to live a straight life. Even as he slowly realises that his lawyer, David Kleinfield, isn’t really a good choice for a friend he feels compelled to help him out. And so, Carlito takes yet another step back towards his old life when he decides to go along with Kleinfield while he tries to help a Mafia chief escape from prison.

Carlito’s Way is not the usual crime thriller, this movie also shows the way a man can be forced back into the world he tries his best to escape. In the first scene of the movie, Carlito is shown addressing the court about how he has learnt his lesson and how he no longer is the man who had gone to prison five years ago. That was probably the truth, but he couldn’t have foreseen the turn of events that would conspire to finally seal his fate.

From the beginning of the movie when Carlito gives a lengthy speech after his release, to the frantic chase in a railway station at the end, we hear the story from Carlito’s point of view, and we begin to understand the man beneath the preachy, self-righteous impression that he initially gives. We see that Carlito is actually a man of firm values, as he himself says later, ‘Never give up your friends, Dave, no matter what’. We see how Carlito is betrayed by these very values as he tries to only gather his money and go out into the Bahamas. In the end, even as he realises his mistakes, it becomes too late to change them, and he goes beyond the point of no return.